The recently announced changes to Facebook’s newsfeed have sent organisations worldwide into a tailspin – from the news outlets who rely on the platform to grow their readership to the Nonprofits who use it to recruit and communicate with supporters. But hold the phone folks: there’s no need to panic! With just a few crucial tweaks to your social strategy, you can ensure that the latest changes are a help and not a hindrance.

The changes in a nutshell

The key takeout from January’s announcement is that the balance of users’ newsfeeds is changing to favour posts from friends, family and Facebook groups they belong to. That means posts from commercial organisations and news outlets will be given far less prominence than they have had in the past. According to Facebook, this is because the platform’s goal has shifted away from helping users find relevant content; instead, it wants to provide users with a space in which to “have more meaningful interactions.” In other words, posts that encourage a more passive consumption of social media (like videos, news articles, sales posts from brands) are likely to be relegated to the bottom of your newsfeed, while your best mate’s holiday snaps that everyone’s commenting on will be bumped to the top. As for why the platform is now opposed to what it classes as passive interactions, Facebook recently acknowledged the mental health risks associated with passive social media use, citing academic research and nicely softening us up for this latest announcement. However, recent studies have also shown that people are now spending less time on Facebook than they used to, which probably has more than a little to do with it as well.

How to make the new-look newsfeed work for you

The good news is that while it might require some additional investment in time and budget, charities are well-positioned to leverage these changes (much more so than your average brand or media outlet that treats Facebook as just another publishing platform). For a start, peer-to-peer campaigns in which your supporters actively share their fundraising efforts and journeys with their personal networks should qualify as prime ‘family and friends’ newsfeed content. Another major plus is that these posts won’t be jostling for position with hourly updates from every news outlet or brand they’ve liked. Second, Nonprofits typically have access to a rich pool of powerful human stories - stories that can be turned into engaging posts that provoke discussion and interaction. This is exactly the type of social media usage that Facebook wants to encourage. Of course, if you’re a small operation (with budgets to match) and rely heavily on Facebook for your marketing efforts, you might still be feeling somewhat apprehensive.

Here are four more ways charities can tap into the changes:

There’s no way around it now - once considered an optional extra, Facebook advertising and paid posts now need to be a critical component of your social strategy. If you’re already allocating some budget to this, consider increasing it. If you’ve yet to dip your toe in the water, now is definitely the time.

The new-look newsfeed is going to be dominated by posts that spark conversation and engagement. While some content is powerful enough to do this all by itself, you’ll still want someone on hand who understands how to nurture and grow a social community and what kind of content is going to resonate the most with your fans Community management requires time and effort to be done well. Invest in it if you can.

As the bods at Facebook have singled out video content as a passive interaction, we can expect it to become less visible in our newsfeeds in future. Consider this in your social strategy and aim for posts that inspire fans to do more than just watch and share.

This final tip is somewhat obvious but important nonetheless. According to Adam Mosseri, Facebook’s head of newsfeed, “Pages making posts that people generally don’t react to or comment on could see the biggest decreases in distribution. Pages whose posts prompt conversations between friends will see less of an effect.” So, be sure to create content with this mantra in mind. Share personal, inspirational stories. Celebrate fundraisers’ successes. Let fans see the difference they are making to your cause. Make it matter! This is the first post in our new Social Media for Nonprofits series. Keep an eye out for the next article coming soon. 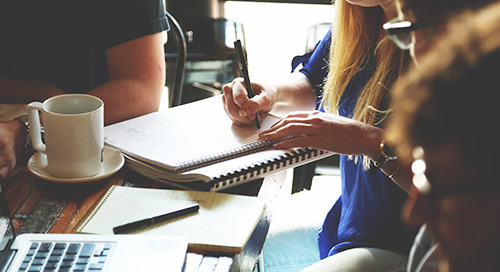 Event planning can be stressful, but with the right planning and preparation, you can make sure your event ...